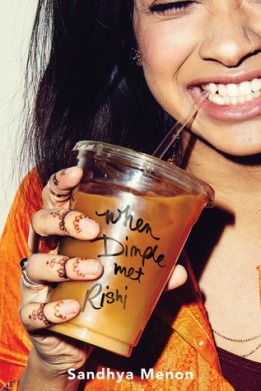 “Dimple Shah has it all figured out. With graduation behind her, she’s more than ready for a break from her family, from Mamma’s inexplicable obsession with her finding the “Ideal Indian Husband.” Ugh. Dimple knows they must respect her principles on some level, though. If they truly believed she needed a husband right now, they wouldn’t have paid for her to attend a summer program for aspiring web developers…right?

Rishi Patel is a hopeless romantic. So when his parents tell him that his future wife will be attending the same summer program as him—wherein he’ll have to woo her—he’s totally on board. Because as silly as it sounds to most people in his life, Rishi wants to be arranged, believes in the power of tradition, stability, and being a part of something much bigger than himself.

The Shahs and Patels didn’t mean to start turning the wheels on this “suggested arrangement” so early in their children’s lives, but when they noticed them both gravitate toward the same summer program, they figured, Why not?

Dimple and Rishi may think they have each other figured out. But when opposites clash, love works hard to prove itself in the most unexpected ways.”

Ok, so I’ve wanted to read this for a while now, especially after  it was suggested by my cousin. We both like similar books and usually we are spot on with our recommendations to each other.

When Dimple Met Rishi is written in third person POV and was a quick somewhat enjoyable read but there was just that little bit of something missing. The book started off well but then sort of dragged on a bit. The plot became quite predictable. Now, don’t get me wrong there were some amusing moments, but most of the time I spent my time rolling my eyes. Another thing that I found unrealistic was the fact that everything happened so easily.

The characters seemed nice at the beginning but again as the book progressed I started to find them a bit annoying. The main character that made me feel like this was Dimple. She started of interesting and really nice but I found she became very rude and dismissive towards others, it turned into what she says goes otherwise it won’t happen. Rishi on the other hand was the opposite of Dimple. He came across as a nice, innocent, traditional kind of guy who shows so much respect for his parents. He was actually my favourite character from the book.

Overall a good book, but nothing to brag about personally. I have recommended this book to a few people who I know will enjoy it, but I did suggest they borrow it from the library, and suggest the same to you, if you haven’t read it already and want to.

Have you read this book? What did you think of it? Leave a comment below and let’s have a chat.

What Reading Can Do
Book. Books and more books. Let’s talk about books

A future librarian, muggle (who wishes they got their letter), cat mom, and lover of books

A classic is a book that has never finished saying what it has to say. – Italo Calvino

Frank opinions, with a warm cup of tea.

When the Colossal World falls apart and you got absolutely no clue, simply READ A BOOK!

Write Where I Read

Beyond the door you'll find a world of book reviews.

Enter my world of books, book reviews and my crazy life

the only kind of affair worth having

Where we enter different worlds by reading!

Library of Books and Tea
elvinawrites

love above all else